126 are delighted to present an exhibition of new work by Siobhan McGibbon (Ireland) and the collaborative duo Ciara Healy and Karl Musson (Wales). This exhibition will show work that has been produced since their time at the ARTFarm in July & August 2013. The exhibition will run from 23 February – 09 March 2014, with preview on Saturday 22 February at 7pm. Siobhan McGibbon’s practice is predominantly sculpture based with a distinct medical slant. Her work derives from a fascination with extraordinary medical conditions that essentially force the host to exist on the edge of anatomy. The artist explores the notion of “normal” and examines the boundaries of anatomy through a series of investigations. This installation investigates the notion of misconception and the cultivation of a fallacy of an illness or medical condition. Fictitious organs and vessels that flourish within these enormous medical apparatuses, an imagined inner bodily landscape created from a collective of misinterpretations. The work is influenced by the evolution of clinical teratology. This is the historical study of abnormalities both real and imagined. Wondrous accounts of illnesses that often stemmed from the misconception or creative interpretation of actual occurring phenomenon’s. Semi human creatures created from the act of bestially. Double headed monsters where the example of god’s wrath. and abnormal limbs where the result of the mothers unnatural thoughts during pregnancy. Central to this enquiry is the modern scientific study of teratogenesis, from the Greek meaning monster making. This is the study of abnormal growths in the foetus. The artist finds it amusing that terminology created from such an absurd misconceptions is still used in science today. The artist is influenced by the medical visualisations of these congenital malformations and the narratives that are created from these other worldly x-rays and cellular imagery. Through this research the artist questions whether the misconceptions of the uncanny body have assisted in the formation of socially accepted notions of “normal” anatomy. Break On Through is the name for the collaborative duo Ciara Healy and Karl Musson. Formed in 2012, they are focused on researching, developing and implementing bold new projects and bodies of work which are concerned with notions of periphery, cultural identity, spirituality, story, power and place from a local and global perspective. How we are linked to other cultures across time and space is a central part of their research interest and is examined in an inter-related and inter-dependent manner. “In her analysis of Ovid’s epic poem Metamorphosis, Marina Werner suggests that literature concerned with shape shifting, with Otherworlds and with the transmigration of souls, usually gains popularity during moments of crisis. More specifically, when one intellectual hegemony seeks to dominate another. Fairy tales, myths and legends were first transcribed around the edge of the Mediterranean, travelling from Egypt to the bustling ports of Venice and Naples, they followed trade routes far and wide and became a means of supporting us over liminal thresholds in our turbulent journey through life.They helped us to imagine, to think about the nature of reality, to live deliberately. END_OF_DOCUMENT_TOKEN_TO_BE_REPLACED 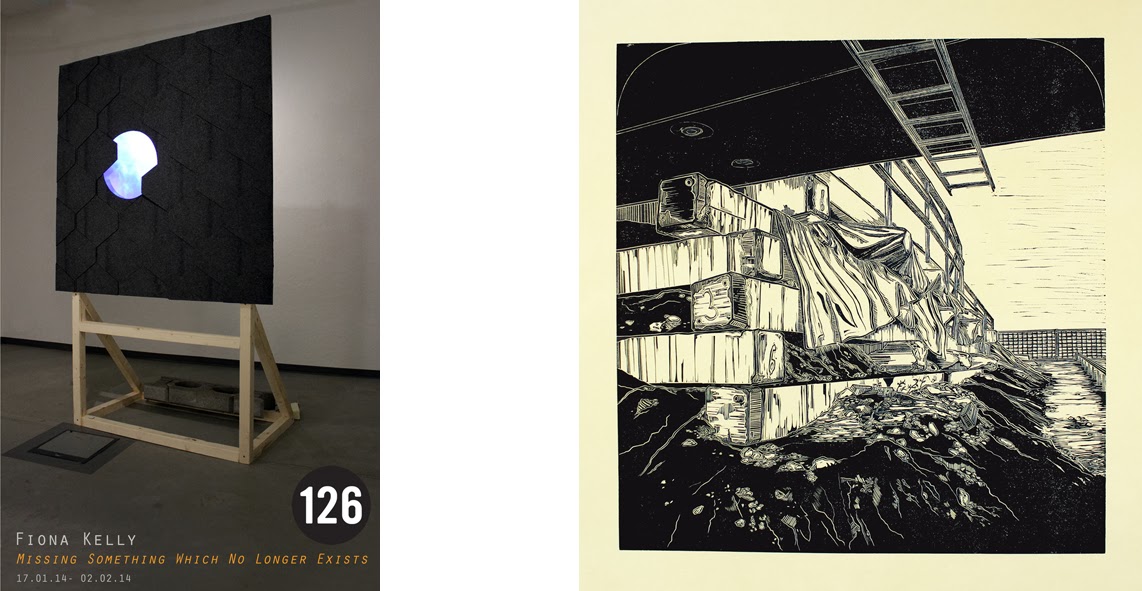 Missing Something Which No Longer Exists, a multi-disciplinary solo exhibition by Fiona Kelly addresses isolation and the interim. Kelly’s observations of the manmade landscape, topographic movement, stagnation and metamorphosing debris are representations, characters for her contemporary fables; a legacy of longing, disposability and escape.

In uniting objects, reclaimed materials and text she endeavours to generate happenings. Through visual combinations the viewer is invited to join in a fundamental dialogue intrinsic to Kelly’s work which quietly speaks of urban sprawl, throwaway culture, and the absurdities found in unremarkable environments. END_OF_DOCUMENT_TOKEN_TO_BE_REPLACED

Continue Reading FIONA KELLY | MISSING SOMETHING WHICH NO LONGER EXISTS